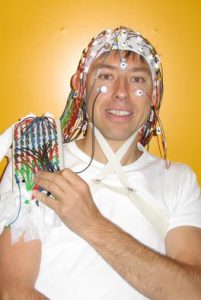 Neurofeedback is a type, or form, of the biofeedback response. With biofeedback therapies, information from sensors on a part of the patients body is relayed back to them. This allows the patient to gain control over the body, and more importantly the brain, in ways previously not available. A few methods of biofeedback that you may be aware of are:

In neurofeedback therapy the information that is sent to the patient is EEG (electroencephalogram). EEG data read by sensors placed on your head using various types of headsets ranging from 1 channel (sensor) up to 64 channels. The small changes in electrical energy variations are read and processed by electronic and computer equipment to provide the patient with moment by moment information about their brain activity.

This output is shown to the neurofeedback therapist usually as wave patterns on a computer screen (see below), and sometimes to the patient as visual graphics that resemble games. Two examples of output for the patient we have seen are: rocket ships racing one another, and rapidly changing ther­mometers that are side by side. The goal of the games are explained to the client, “Make one rocket ship go faster than the other”, and the patients brain will figure out how to make that happen, typically without the person knowing how they did it. An audible sound sometimes accompanies a positive response, think Pavlovian Response. The desire to the audible beeps is usually enough to get the brain to cooperate.

To get the optimal result, neurofeedback requires multiple sessions, usually at least 20, but some patients will progress faster and slower than others. Currently, seeing significant improvement in ADHD, takes 40 or more sessions.  Many patients enjoy the sessions which keeps the training from feeling like a chore. Typically, sessions are held at least twice weekly so that the carry-over effect from one session to the next is not lost. It’s like going to the gym, except that the brain is learning a skill that it can keep.

Neurofeedback can work in conjunction with medication and psychotherapy. Often the amount of medication a client may need after neurotherapy may lessen, though this is never assumed. In the case of ADHD, neurofeedback may improve cognitive functioning for some people to the point where medication no longer needed, while others will still need ongoing medication.

Neurotherapy, as the application of neurofeedback is sometimes called, has several goals. They include:

An Introduction to Neurofeedback

If you are looking for the old PDF titled “An Introduction to Neurofeedback” you can find it here.

Do You Have Neurofeedback News?

If you create any neurofeedback news on a regular basis, contact us here.